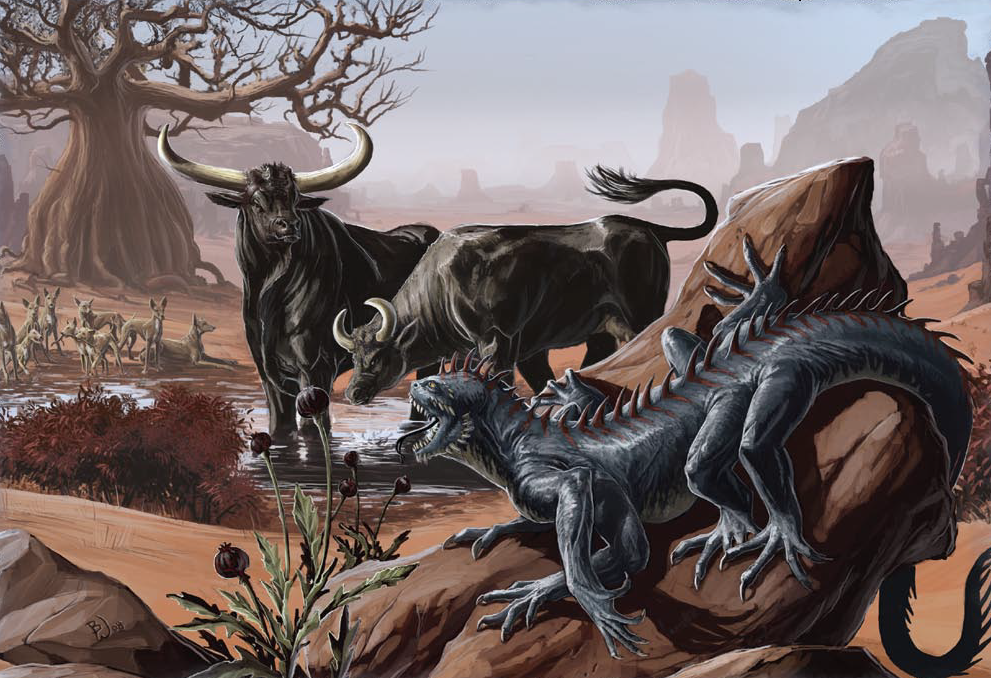 The least hospitable landscape in Varisia, the Storval Plateau, has been written off by most of the region’s residents as worthless, fit only for the crazed Shoanti barbarians.

In the early chapters of Golarion’s natural history, the Cinderlands were actually a prehistoric coral reef system which rested beneath the primordial sea. The area that would become the Storval Plateau was created when the world’s bowel shifted and the great convergence of two tectonic plates lifted a large section of the sea, along with magma that rose to the surface forming a volcanic belt below the Cinderlands. This causes the blizzards of ash and cinders, ember-storms and earthquakes that are experienced today.

The badlands are rugged, inhospitable terrain formed by long periods of drought and heavy wind erosion and make up the majority of the Storval Plateau. The Yondobakari flows south from the Mindspin Mountains and provides the lands just enough water to prevent desertification. Odd rock formations, canyons, gullies, and hoodoos fill the landscape, separated by twisting valleys and crags. Short, weedy scrub grows in patches throughout the badlands, offset by succulent plants.

The Storval Plateau is made up of many different rocks and minerals. Blood-red charstone, Black Granite speckled with potash feldspar gemstones and rocks that form within copper ore, such as azurite and malachite. Ash stone is similar to sandstone; it forms when layers of volcanic basalt particles accumulate through sedimentation and pressure, eventually forming unique black-tinged cliffs.

Cinder Cones are covered throughout the Storval Plateau, hills of volcanic fragments built up around volcanic vents. the larger ones near natural gas seeps are capable of lava flows and extreme explosive eruptions. Seismic activity accompanies these magma fountains, and the small volcanoes vent incredible amounts of ash through their flanks and summit craters.

Emberstorms occur during the summer, when the wind is at its driest, an emberstorm can form in the aftermath of a particularly large wildfire. Because the generated heat is so great, the surrounding oxygen burns instantly, creating inward-facing wind currents. Once this occurs, a perpetual cycle of oxygen, ash, and embers feeds the fire and intensifies its heat, giving it its own renewable source of fuel. The winds produced by this phenomenon can reach hurricane-force gales that cause the emberstorm to grow to devastating sizes. With a good wind behind it, the storm can travel hundreds of miles. Emberstorms are massive areas of moving, deadly weather, easily measured in miles.

Methane Seeps are gas seeps emit odorless, volatile organic compounds that the naked eye cannot perceive. While these vapors are non-toxic, they are composed of a highly flammable compound that combusts in the presence of any heat source. These methane seeps fuel the Cinderlands’ natural wildfires and keep them burning even in areas of sparse vegetation. A methane seep might take the form of an isolated gas vent or an entire gas field hundreds of feet in diameter. Some of the larger geysers have depleted their gas stores, leaving sprawling caverns deep below the surface.

Water hoarders are succulent plants capable of storing water during periods of rainfall that sustains them through droughts. They gather moisture via shallow roots and store water in membranes composed of expandable tissue, which swell noticeably when full. Since they are targets of thirsty animals, most hoarders have developed defense mechanisms, such as poisonous thorns, to keep potential water poachers at bay. Cacti comprise the majority of this group, although some bushes and trees can hoard water as well.

Drought tolerators have learned to use what water they need when it is available, and then enter dormant states during periods of drought. A resinous substance coats their seeds and washes off when it rains, allowing germination to occur only in the presence of water. To bear the lack of hydration, many have evolved small leaves that require little water, which they shed during periods of extreme drought. Common tolerators include bushes, scrub, and grass.

Fire adapters have changed to survive fire through various techniques. The majority of them grow reserve buds and branches at root level, which burgeon after a fire has burned the plants’ leaves. Some exotic plants display a trait known as fire-induced germination—the seeds remain dormant until the presence of heat opens the fire-resistant seedpods, allowing them to take over an area quickly after a fire has reduced the competition to fertile ash. The more ruthless adapters even encourage fire by exuding flammable oil from their leaves. Fire adapters contain all manner of flora, found in the hottest areas and those that sustain wildfires.

Many creatures in the Cinderlands have had to make special accommodations simply to survive. A mammal grows longer eyelashes than usual and has the ability to close its nostrils—two traits that keep dust and ash out of its system. A predator lies in wait in a burn zone until the approaching wildfire drives fleeing prey into its hungry maw. An animal that is diurnal in most other environments becomes nocturnal to avoid the blistering winds and heat. The underlying theme is one of survival, and this mind-set radiates throughout the Cinderlands, from the massive storm roc to the lowly scrub rat.