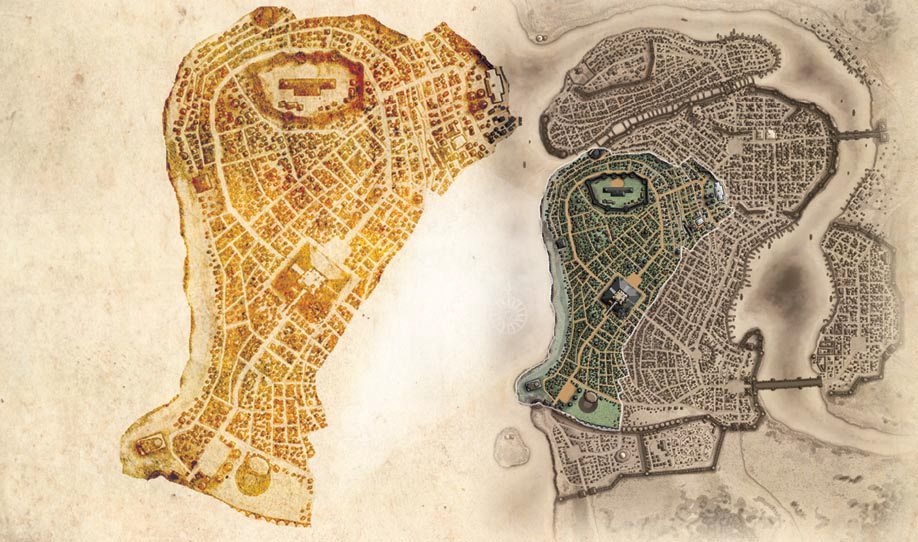 The Heights stands atop Citadel Hill with a cliff along its western side defended by several Sable Company watchhouses as well as The Great Tower itself. This district has the city’s most important structure and is the most patrolled by the Korvosan Guard. Originally this is where the largest concentration of Shoanti inhabited before the three Battles of Mainshore and Siege of the Great Mastaba forced them to flee.

Due to its proximity to the sea, sinkholes are a rather common phenomena in this area of the city, though most measure no more than a few feet in diameter occasionally larger ones occur, such as in 4579 when the largest recorded sinkhole opened up, though this one did not occur naturally and an infestation of ankhegs broke out from below. The Dwarves of Janderhoff generally stabilize the ground around large sinkholes and insist on performing inspections on them twice a year, despite some of them last more than a hundreds years with no issue, they remind the short-sighted humans that a hundred years means as little to stone as a second does to them.

An area of the district has become known as the Shingles due to how close the rooftops are, and how often they are used as a means of travel to avoid the roads.

The least expensive bed and breakfast in the city, due to its location in Citadel Hill, the rooms overlook most of the city and Conqueror’s bay. The rooftop of the building is inhabited by multiple nests of pseudodragons thanks to their love of driving off imps from the nearby Academae, though they do make pests of themselves whenever guests flash shiny objects or uncovered food.

This temple serves as the center of worship for the Church of Asmodeus, it was rebuilt by Queen Domina in 4683 was concentrated with the sacrifice of 13 virgins, an event that sent shockwaves through the city. From the air, the building looks like a large red five-sided star (the holy symbol of Asmodeus) with low, white square sections connecting several of the arms. A red-glass dome stands in the center of the star.

Built and operate by House Jeggare, this large museum houses thousands of artifacts pulled from ruins and Shoanti camps all across Varisia. In the lobby of the museum a statue of Montlarion Jeggare stands to greet visitors. This museum also houses artifacts from distant continents from Arcadia all the way to Tian Xia. The current curator of the museum is Mercival jeggare who happily buys artifacts from freelance treasure hunters for reasonable prices.

The University was founded by House Leroung in 4488, though it pales to the Academae in magical prestige, it possesses its own reputation from greatness among the many schools operated by House Leroung throughout the Inner Sea. House Jeggare commissioned a private library to be built on the grounds and donated many rare books, including the original journals of Saint Alika Epakane, Montlarion Jeggare, and Queen Domina.

Though the smallest of the beds and breakfasts in the Heights, Tenna’s is very expensive due to its scented baths, massages, manicures and pedicures, also serving three lavish meals.

Owned by House Jeggare who were seeking to bring some of Cheliax’s famous operas to the Korvosa, unfortunately there hasn’t been a performance that has been more than mediocre in many decades. The current manager Touran Palastus (well known for his temper than managerial talent) has been bleeding money from the with his written performance. Many leave the city for distant Magnimar or Sandpoint, seeking better treatment even at the cost of prestige.

The turreted temple of Sarenrae stands in a relatively sparse area atop Citadel Hill, where it can absorb the sun’s warning, healing light unobstructed. The building is made of white marble which was imported at considerable expense, it remains the priciest building in the city per square foot (much of which was footed by the city of Korvosa itself).

Teetering on the edge of the cliffs, the Overlook gets a little closer to falling into the raging surf below each year. This hint of danger carries over to the tavern’s offerings: Asa Hemrich, the bartender offers a drink he calls This-n-That. It has no recipe and no definite look or taste. Anyone who can finish off a This-n-That earns Asa’s respect and gets to drink for free for the rest of the night. Though this is ordered several times a week, he only has to give away free alcohol once or twice a month.