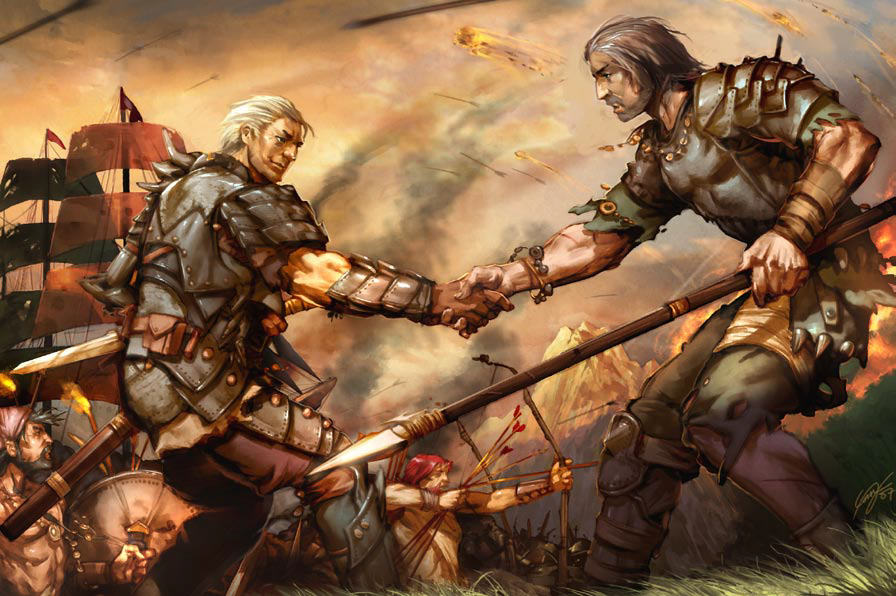 The Siege of Endrin Isle was the first large battle between the Chelish Colonizers and the Shoanti, the siege lasted over a month and occurred in 4407.

Admiral Kiameleu arrived in Varisia through Conqueror’s Bay and approved two expeditions to land, the first was a marine unit that was to land on the mainland and another was to be led by Montlarion of House Jeggare to take a small party up the mouth of the nearby river.

Waydon Endrin and his men had begun to set up a temporary base when they came under attack from a large Shoanti force and was forced to defend this position. When the Shoanti attacked the Admiral’s ship in small fishing boats he ordered a retreat of his fleet, all of whom obeyed the command except the frigate Merciless under the command of Keyra Palin who remained behind to offer support to the beleaguered marines still on the island, suing its catapults and contingent of sorcerers during the month-long siege.

Montlarion led his famed expedition up the river that now bears his name to the Mindspin Mountains, and after several weeks he met up with Field Marshal Jakthion Korvosa. Montlarion and Jakthion would fight their way passed the Grand Mastaba until they came to the shores of Conqueror’s Bay. Korvosa and his men would capture dozens of Shoanti boats and crossed the narrow river. After a bitter battle, the Chelish army regulars linked up with the exhausted marines and broke the siege, chasing the Shoanti army off the island.

Admiral Kiameleu would return to Cheliax in an attempt to have Keyra Palin court-martialed for disobeying his orders to retreat, but Field Marshal Korvosa and Waydon Endrin would intervene on her behalf. Kiameleu was demoted and his first mate Captain Veldraine would be given command. Kiameleu would be further disgraced after his settlement was raided by the Shoanti with no survivors, criticism over the poor defensive position it provided.

Waydon Endrin would found Sable Company and become Fort Commander until his retirement in 4415, but would return as 3rd Lord Magistrate in 4417.

Keyra Palin would become Fort Commander in 4415, moving her command aboard the _Merciless _ and founding the Naval Garrison of Palin’s Cove.