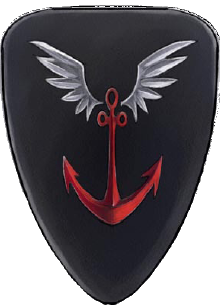 The Sable Company is an elite, hippogriff mounted company of marines. It was first founded in by Waydon Endrin with the other marines that survived the Siege of Endrin Isle. First by tradition, and later by addendum to the city’s charter, the Sable Company does not answer to the leader of Korvosa, regardless of the leader’s title, but instead the commandant reports directly to the Seneschal of Castle Korvosa who, as also decreed by charter amendment, cannot have less than three generations of separation between common ancestors with the city’s leader.

The Sable Company is generally in smaller number than the Korvosan Guard but are much better trained than the regular soldiers, but both groups benefit on their close ties and coordinated effort. The Sable Company relies on the guard to coordinate with the Order of the Nail and The Academae, as the groups don’t generally get along.

Unlike the Korvosan Guard, Sable Company is a little more integrated allowing any human member to rise above major, though to this date all leaders have been pureblood Chelaxians from noble families, but in theory any general can receive the promotion to Commandant.

Sable Company coordinated its efforts closely with the Korvosan Guard when the riots broke out.

After the failed assassination attempt by their leader, Sable Company was eradicated by the conflict that followed the few surviving members fleeing or being captured by the Gray Maidens.