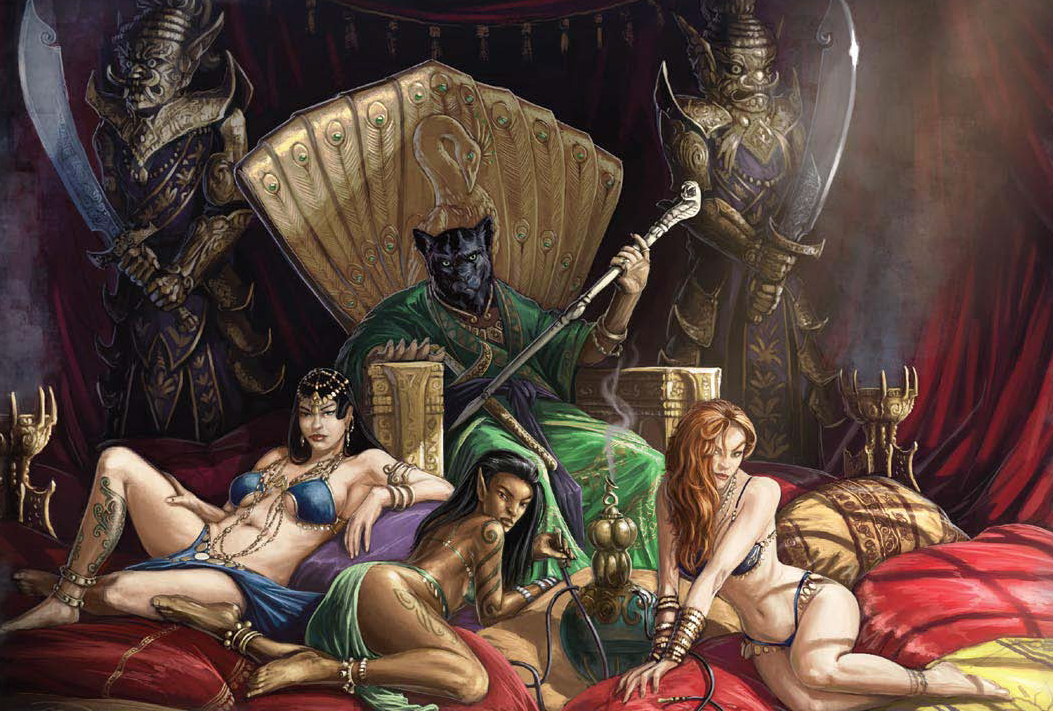 Rakshasa are born on Golarion, but they are not of it. They are born of the reincarnations of manipulators, traitors, and tyrants obsessed with earthly pleasures, they are the embodiment’s of the very nature of materialistic evil.

History of the Rakshasa

Rakshasa trace their heritage back to a Vudrani Sorcerer-King who sought to enjoy an eternal existence of hedonistic comfort and control, and though the names, times and details of this legendary figure’s actions vary among the epic poems the Rakshasa tell of his exploits, the broad strokes are similar enough.

A Sorcerer named Mahka Abihcara became obsessed by his own mortality, but his great love of food, sleep and other physical activities made him unwilling to become undead or to transform himself in any other kind of spell-crafted abomination. He also rejected any idea of paradise in an afterlife, for such an existence would require him to become subservient to a god or similar entity. He came up with the philosophy of dhruva jivita otherwise known as eternal rebirth.

To accomplish this Mahka needed to absorb so much life that his death could not destroy it all and set about expanding his territory through a series of violent wars and moved with his army to enjoy each new sight, smell and cultural entertainment of the people he conquered. He also began the practice of eating the mightiest heroes of his defeated foes in grandiose feasts. Each feast was a complex ritual to absorb the life of those he ate and tied together the lives of himself and his generals.

After a long lifetime of consumption, depredation, and greed, Mahka became too frail for even his mightiest spells to maintain him. He was reviled as one of the most evil beings in Vudra, but was also honored as a great patron of the arts and collector of wisdom and knowledge. Mahka called his generals to him and offered each an animal, saying these would be their guides on a great journey. In most traditions there are twelve generals, but the animals vary too wildly to form a conclusion, though all stories agree that Mahka took the tiger for himself. He explained to his generals that as long as even one of them remained alive, any of the others could return and be reincarnated as a new living creature. Then he killed and consumed his tiger, eating himself to death.

The twelves generals thought that Mahka had gone mad, each still took their animal guide and went to war with each other, tearing his kingdom apart in the process. Only one of the generals renounced the laws of Mahka, declaring them evil and fled. The spear-warrior was named Gopa Citrasena and was given the mongoose as his guide.

Twenty years after the death of Mahka, a young sorcerer began to reconquer his empire and to teach the philosophy of dhruva jivita. This sorcerer was impervious to weapons, could shrug off spells and was a master of deception. Whenever he captured one of Mahka’s generals he would slay him and his spirit guide. In time his generals came to understand that Purusav was just the reincarnation of Mahka, come back as he claimed though to the common folk they simply believed him to exist to prove the existence of a greater evil then Mahka.

Purusav however met his demise at the hands of an ageing Gopa Citrasena and his gray-furred mongoose in a battle atop the spires of his black, jungle-choked capital of Jayat-Von. At the end of their epic conflict, both were dead and only one of the city’s wooden spires remained standing. In his death, Purusav was revealed to be a tiger-headed monstrosity with backward-bending hands, though by then many of Mahka’s generals had been reincarnated and thus Purusav was as well. According to the Rakshasa, as long as one lives, all others will return in accordance with dhruva jivita and thus the knowledge of their foul philosophy survives and spreads, more wicked souls might be reborn as new and terrible Rakshasa.

Although the body of a Rakshasa is essentially human in form, each has a head that takes the appearance of an animal, usually one that is native to Vudra. No Rakshasa has a head of a mongoose, as mongooses instinctively hate the evil outsiders. Rakshasas always have one reversed element of their anatomy which gives away their fiendish nature, such as having reversed hands, ears that face backward, elbows that bend inwards.etc… Rakshasas always assume well formed and attractive human forms, though they are not so foolish as to never use the form of a bent old man or scarred fisher-folk.

Because Rakshasa are the resurrections of evil mortals, they are forced outside the normal cycle of eternal fates, being neither sent to a final resting place nor returned to mortal life. Thus, they are outsiders, creatures of the boundless planes, though unlike those fiends that naturally exist in other planes, Rakshasa age, eat, sleep and can be raised from the dead.

Society of the Rakshasa

Rakshasas believe that each and every creature in the universe has a proper role to play, and that success comes from understanding one’s role and working to improve it. Thus Rakshasa have a caste system in their society, those of higher caste should be respected for their great power and those of lower caster should be pressed into willing service to expand the holdings of their betters as they seek greater wealth and influence for themselves.

All Rakshasa however believe they are destined to become Samrata (Lord of Lords) and can change castes as they move towards their “inevitable” final rank. The most disgraceful cast is the pagala (traitor), Rakshasa who have usually become chaotic or good as a result of magic or some unthinkable upbringing. Rakshasa do not blame pagala for their unfortunate status but also cannot allow it to go on unless it may be useful at which point a Rakshasa might attempt to return it to the proper order.

Rakshasa view all other non-Rakshasa as goshta (food), any thinking creature that is not one of their own kind or an evil leader worthy of having Rakshasa serve it is food. Rakshasa see this as the cosmic role of other creatures and sees nothing wrong with it. Any non-Rakshasa who is worthy of service is seen as paradeshi though not all Rakshasa see it this way and those who do not need to prove it by defeating the imposter and eating that creature. Doing so allows it to claim all his Rakshasa servants as his own. Mostly Devils claim this title, though some particularly malevolent Dragons, Hags, Efreeti and mortal Wizards have also claimed it.

While Rakshasa are forced to admit the gods have powers greater than their own, most scoff at the concept of divinity. Too many examples of powerful, ambitious, or merely lucky mortals attaining divinity exist for the Rakshasa to pay religious homage to such creatures. Thus as a race, Rakshasas deny the worship of deities, although they welcome alliances with the servants of such peerlessly potent beings.

Rakshasa Priests often dedicate themselves spiritually to a concept or ideology, seeing the concepts of Greed, Ambition, Tyranny and raw power to be more worthy of religious veneration then a God.

It is revealed that most members of House Arkona are Rakshasa.