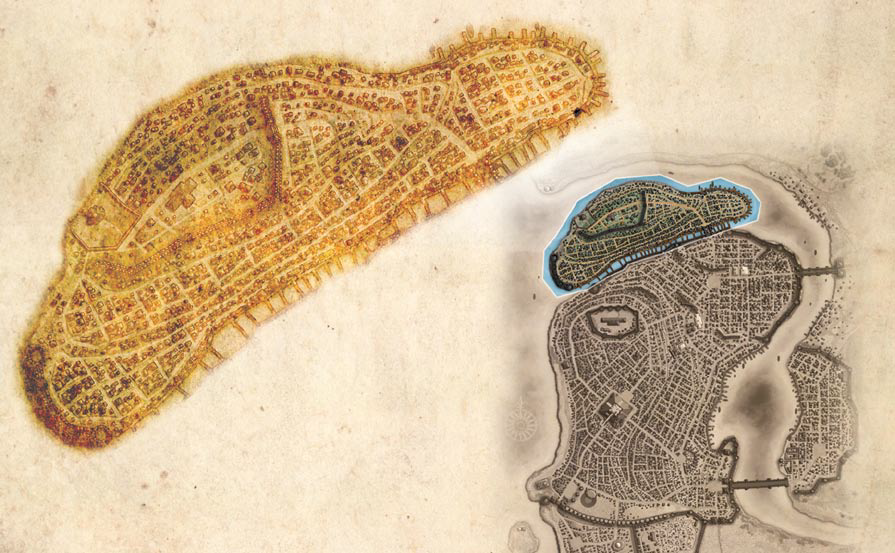 Old Korvosa, as the name implies is old. It covers all of Endrin Isle, and atop Garrison Hill stands the stone wall of Fort Korvosa which was completed in 4438. This was where Waydon Endrin landed and began building the temporary settlement when the Siege of Endrin Isle began. The old wooden palisade was mostly destroyed in the The Great Fire along with many of the buildings, so most structures from the first settlement no longer exist, though a lot of the buildings are still among the oldest in the city.

This district is the poorest in the city, with the Old Dock area considered the city’s most run-down and least-desirable ward to live in.

This dark-brick building is sometimes called Charcoal Palace, was the tallest building in Varisia until the Arvensoar in Magnimar surpassed it (an honor reclaimed by Korvosa when the North Tower of Castle Korvosa was completed.) The Charcoal Palace was the first building completed after the Great Fire, it was already half-finished when it began and was luckily undamaged during the battle. It served as city hall for 60 years until Lord Magistrate Remsev Ornelos moved his government to the current city hall in 4489.

These buildings served as barracks for Fort Korvosa’s small garrison of Korvosan Guard and Sable Company trainees, as well as classrooms. All marines and Guard Officers have attended the academy since its inception, which is what generally keeps good relations between the two groups and allows them to continue in joint operations.

A fixture of Old Dock for more than two centuries, the Sticky Mermaid has seen more than its share of bar fights and deaths. The Korvosan Guard eventually grows tired of breaking them up and shuts it down every few months for a week or two, until the owner appeals to the Church of Abadar and pays a hefty fee. Reopenings usually result in free rounds of the tavern’s special spirit for its returning customers.

The first drinking establishment built in Fort Korvosa, it survived the Great Fire relatively unscathed and served as a medical bivouac and triage center following the aftermath of the event. The jaunty place claims to have served its namesake the week before his death, though the truth of this claim is hard to prove, history can confirm that Montlarion Jeggare stopped by this pub once or twice a month to purchase bottles of Chelaxian pepper whiskey, from which he drank a single shot before distributing it to the rest of the other patrons. When he died, the owner of the time decided to honor him by giving the pub its current name.

Old and crumbling, the temple has lost almost all its splendor. A pitiful trio of clerics attempt to maintain the building as best they can, holding services every Sunday for a constantly shrinking number of curious observers. Twice the city has threatened to raze the building and raise a new temple, but each time the trio was able to muster enough support to spare the building.

The disease spread through the Old City very quickly, causing mass panic and an attempt for many to move mainland. When the quarantine was put into effect these attempts did not stop and when the mobs attempted to overpower the Gray Maidens who were guarding the bridges, they instead destroyed them all. Old Korvosa now sits completely isolated from the rest of the city, with Frigates ensuring no boats leave or enter. The Church of Abadar still managed to sneak in the cure under the watchful eye of the Gray Maidens, though even with the passing of the Blood Veil the quarantine still continues.