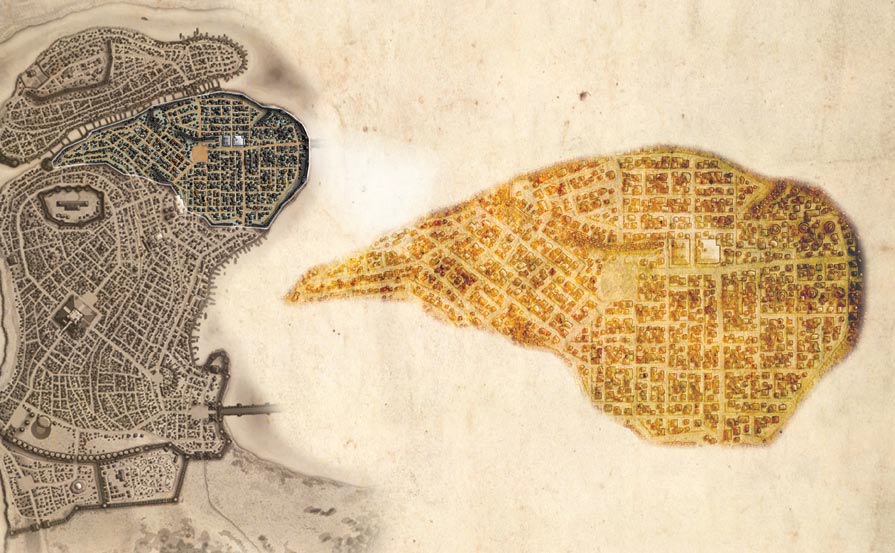 North Point was the first section of the mainland settled by the descendants of the city’s Chelish founders, it was previously called Mainshoren where three battles took place between the Chelish settlers and Shoanti to establish control of the land. Following the third battle, the garrison erected a wooden palisade, which a stone wall later replaced (sections of which still stand and mark the boundaries of the ward). Mainshore has dozens of statues, plaques and memorials spread throughout it to remember the blood spilled to establish it.

Bearing Keyra Palin’s nickname it is the oldest surviving inn on the mainland, being the only structure on the mainland that was not razed when they pushed back Chelish settlers during the Second Battle of Mainshore, in 4439. The building stands out due to its age but it is also a favorite destination of visitors thanks to its long history.

THis market of questionable legality operates in New Dock, many of the goods sold within it appear freshly delivered, though most have some amount of minor damage to them. The Order of the Nail have attempted to link the wares sold in the Dock with cargo reported missing from ship manifests.

Also known as Arbiter’s Hall, this is where the worst criminals are judged and executed. Violent crimes and crimes against the city or state of Cheliax all warrant the death penalty, and those not ordered by the monarchy themselves are judged here. The offenders are brought into the Deathhead Vault below, which is patrolled by the Church of Pharasma as those executed here don’t always remain dead.

This large building was once the seat of governmental power in the city when the Lord Magistrate ruled, though it still houses the various ministries and the myriad offices of the growing bureaucracy. City Hall as a structure, with its White style architecture characterized by thick pillars and long rectangular windows shines as a beacon of pre-infernal Chelaxian tastes. Within the foyer hangs a massive 8-foot-by-13-foot painting by famed artist Endrink Archerus, shows Field Marshal Korvosa meeting Sergeant Endrin atop the ruined earthworks of Fort Korvosa, known as Breaking the Siege. Though it is rife with historical inaccuracies, it is by far the most famous painting in or of Korvosa.

Situated in the west end, the Posh and Turtle remains the finest inn and tavern in all of Korvosa. Upon entering the establishment, it is difficult not to notice the glass flooring overlooking a wide but shallow sea cave. Within the cave lives a 20-foot long sea turtle named Old Tom, who grew too large to escape through the narrow opening back to the ocean. Narrow grates allow patrons and waitstaff to drop food to Old Tom . Three times per day, the inn’s wizardly owner Thaviun Rigulus magically cleans Old Tom and the sea cave directly below.

Though Old Tom is a great attraction, the inn is of high-quality furnishing, from it’s gold-leaf flatware to the emerald-studded wine glasses. The inn has been declared the best inn north of Cheliax, which has created a lot of competition with the Goldlager in Magnimar. Druids occasionally protest the inn for the release of Old Tom, and several times the Korvosan Guard have been forced to remove them.

North Point was among the second most afflicted district when the Blood Veil hit, which caused delays for the Church of Abadar which needed to heal its own members before the public. All the bridges that connect with Old Korvosa were also destroyed when quarantine of the island was put into effect.