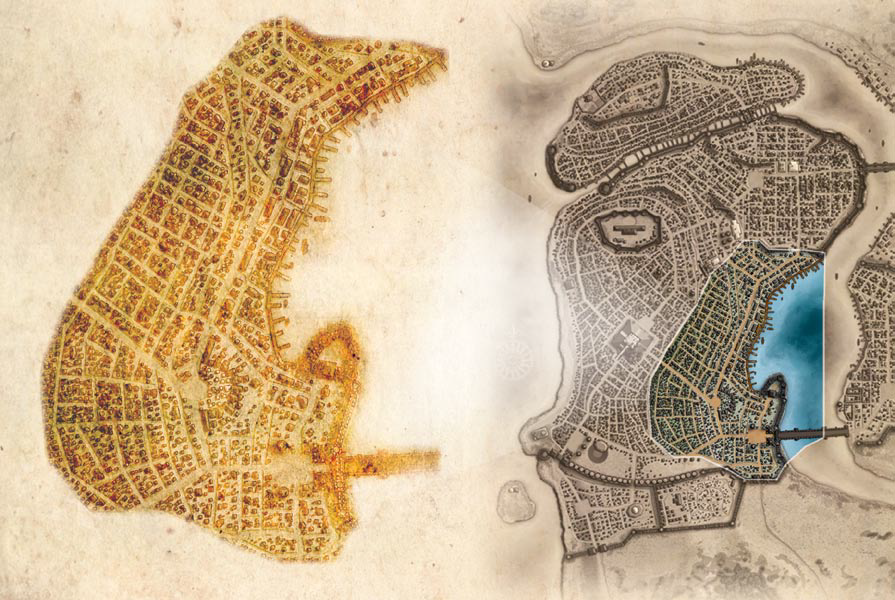 Midland is the most diverse area of the city, it is mostly made up of residential on the western side with the waterfront making up Korvosa’s harbourfront. It is also the home of the Korvosan Guard, making it the district with the least gang violence though it is rumored that the Cerulean Society operates out of this district as well.

This rough tavern frequently serves recently released prisoners of Citadel Volshyenek’s jails. Because of that it also serves strong coffee to a high number of Korvosan Guards. Drunken prisoners infrequently try to brawl with the guards, which usually end really quickly and with a return to jail.

Korvosa’s largest market and the main attraction in Midland, people from all over the city descend daily on the stands, stalls, and tents that form the backbone of this open-air market. All manner of foods and handicraft from Korvosa’s holdings and the rest of Varisia appear, from sugary snacks made by Varisians such as Oliphant Ears (fried on the backs of tower shields) to minor magical items and elixirs.

Set up with a nautical theme, the Creaky Hammock tends to serve ships’ crews in port for a few days. Its attached tavern makes for lopud nights and boisterous days, which led to the saying, “The only way to sleep in the Creaky Hammock is to drink yourself asleep.” Many sailors often pass out on the floor rather than getting themselves rooms which leads the innkeeper to turn such guests on their sides, so they don’t choke to death on their own vomit.

This district was the most affected by the riots that broke out after the death of King Eodred Arabasti II leading to increased Korvosan Guard patrols.