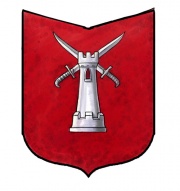 The Korvosan Guard serves as the primary military force in Korvosa, serving the city of Korvosa first, the city’s leader second and the church of Abadar third.

The Guard was founded by Waydon Endrin to create a military structure under the command of the Lord Magistrate rather than relying upon the Imperial Army that took its orders from the Emperor of Cheliax. In the early years of the settlement its forces were mostly comprised of members of the Imperial Army which continued to bolster its ranks until after its victory in the Siege of the Great Mastaba.

The Korvosan Guard has always served at the leisure of the Lord Magistrate or King and Queen of Korvosa, the one exception was during the Cousins’ War when they fought on the side of the loyalists of House Endrin rather than the separatists of Lord Magistrate Amycus Viamio. At the end of the conflict the Guard relocated its base of operations to Citadel Volshyenek and continues to use it as their headquarters to this day. The current Korvosan Guard numbers 700 men and women under the command of Field Marshal Cressida Kroft.

The Korvosan Guard was at the helm of dealing with the riots and mobs when King Eodred Arabasti II died and the city was plunged into anarchy. Their casualties were relatively light but dealing with the damages and ongoing crime kept them very preoccupied. The Guard has been forced to outsource work to other groups as they lack the resources to deal with everything.

With the outbreak of the Blood Veil, the Korvosan Guard has been assigned to assist the newly formed Queen’s Physicians and Gray Maidens. Most of the female members of the guard we’re transferred over to the Gray Maiden’s by decree of the queen.