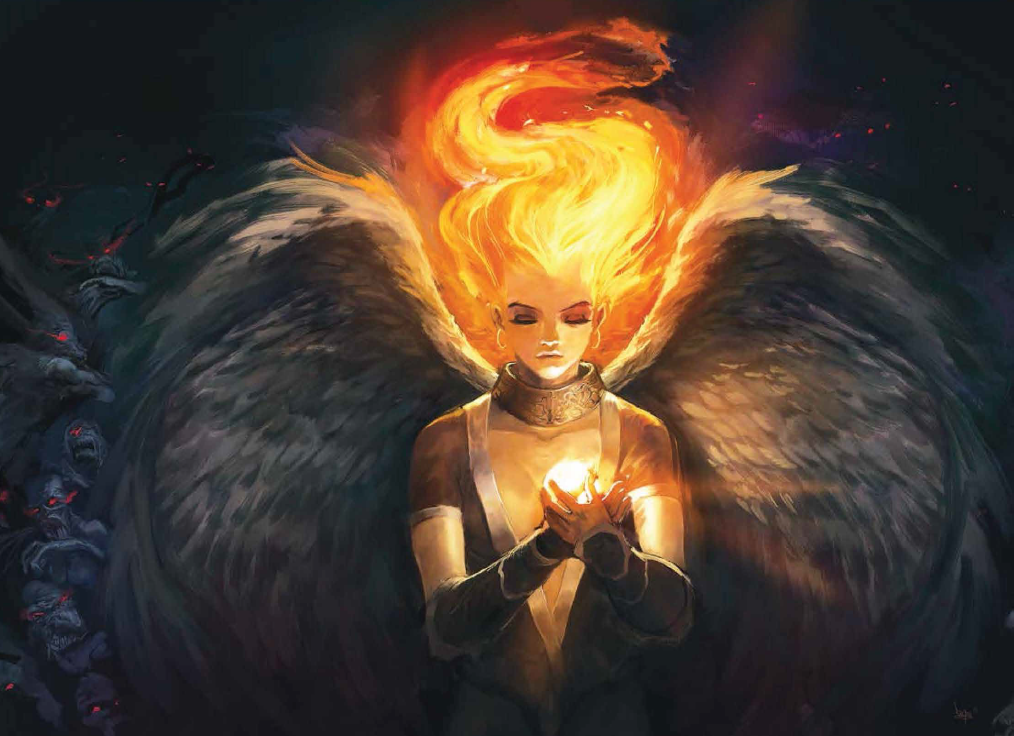 Sarenrae is one of the most popular deities on Golarion, and followers of many other faiths respect her power, dedication, and generosity. Once a powerful angel known as an empyreal lord, Sarenrae led the heavenly hosts in the charge against the Rough Beast, Rovagug, and it was she who dealt him the great blow that led to his chaining. Now a goddess in her own right, Sarenrae is kind and loving, a figure of light, guidance, and healing, and has great patience with those who choose to be blind but may one day see. Yet for all her compassion, Sarenrae is also a powerful force against evil, and strikes down the irredeemable without mercy. Her faith is ancient; it first became popular among Keleshite humans, then spread to the Garundi in ancient Osirion and into other human and nonhuman civilizations as well.

Eons ago, Sarenrae was an angel guiding the energies of the sun and battling evil beings that sought to plunge the newborn world of Golarion and its sister planets into eternal darkness. Other angels lent her their support and turned to her for leadership in these battles, and eventually gods joined them as she grew in power to become one of the mighty empyreal lords. Sarenrae was the first to stand against Rovagug’s attempts to unmake Golarion, and she faced the Rough Beast personally when the other forces of creation were engaged with his hideous spawn. The exact circumstances of the battle are a mystery to mortals, but it is believed that her willingness to sacrifice herself for the good of all inspired her flagging comrades to new hope and courage, and elevated her from one of the greatest angels to a full goddess. With this influx of power, she smote Rovagug and hurled his broken body deep into the earth. As the gods healed the planet’s scars and intelligent life appeared on its surface, mortals turned their eyes upward to thank the life-giving sun, and her faith took root among primitive peoples.

Sarenrae is a goddess of boundless love and exquisite kindness, a caring friend, mother, sister, and protector of all in need. She delights in healing the sick, lifting up the fallen, and shining a guiding light into the darkest hearts and lands. She brushes off insults and deflects attacks, patiently trying to convince those who perceive her as an enemy that their belief is false. For all her patience and gentleness, however, she is no victim: if it becomes clear that her efforts are wasted, she responds to violence and predations upon the innocent with cleansing fire and scorching light. She dislikes cruelty, lies, needless suffering, and thoughtless destruction. Ancient and timeless, she stands fearlessly against the full tide of darkness, promising that the dawn will always come, and with it, hope, truth, and kindness will triumph.

The Dawnflower’s faith is a broad one, and the majority of her worshipers are everyday folk who recognize the power of the sun, take comfort in the idea of a deity’s love and compassion, and believe strongly in both redemption and righteous action. Her faith attracts those with kind hearts who are nevertheless willing to harden them when kindness is a dangerous weakness. The faith makes few demands of its everyday adherents beyond these tenets, and its clergy are usually seen as valiant protectors and enlightened teachers.

Sarenrae indicates her favor with sightings of doves, rays of dawn or dusk sunlight that last far longer than they should, the discovery of yellow stones or gems, or the sudden soothing of aches and pains. Her displeasure is most often made apparent through unexplained sunburns or periods of blindness that can last anywhere from only a few moments for minor transgressions to a lifetime for mortal sins. Her holy symbol is an ankh, though more stylized versions show a winged ankh or a winged female figure with arms outstretched and a halo of flame. Her titles include the Dawnflower and the Cleansing Light to her enemies, she is the Warrior of Fire.

During the Age of Enthronement, missionaries from the Padishah Empire of Kelesh, where worship of Sarenrae is the state religion, began spreading her faith into the Inner Sea region, where it quickly took root. Today, the church of Sarenrae is common across the region, with good communication between temples and amiable relationships with most non-oppressive governments.

The church is strongest in Absalom, Katapesh, Osirion, Qadira, Taldor, and Thuvia, in which great gold-adorned open-air temples rise tall and white into the skies, though the church’s emphasis on kindness, healing, joy, and redemption makes it popular across the continents, and shrines to the Dawnflower dot countrysides in most nations. The desert flavor imbued by the church’s Keleshite origins remains noticeable in larger and more traditional temples, though smaller and more rural congregations often let regional traditions and aesthetics shape their worship and their conception of the goddess.

Services are joyous events incorporating singing and dancing, accompanied by upbeat music; they always take place outside and during daylight hours. The church is very supportive of marriage, and a wedding in a temple is always cause for celebration. There is no stigma attached to divorce, and the delight over a second or third marriage is just as heartfelt as for a person’s first. Worshipers in many regions re-consecrate their vows every io years.

For Sarenrae’s congregations, faith is not merely a theory, but an active force that underpins their actions; they try to see things in her light, which reveals the hope and potential for goodness in the people they encounter. Sarenrae encourages her faithful to speak out and take stands for what’s right-a practice that leads many to characterize Sarenites as fiery zealots. In truth, however, the other half of Sarenrae’s teachings-that one should always seek first to understand and redeem foes rather than immediately write them off-means that while Sarenites may be passionate and outspoken, their finely honed sense of right and wrong is tempered by compassion.

Sarenrae’s faith is one of kindness, healing, honesty, peace, and forgiveness. Her clergy believe wholeheartedly in redemption, and are patient and compassionate in attempting to persuade evildoers to mend their ways. Hers is not a passive faith; the Dawnflower’s servants teach that goodness is more than simply not doing harm. They see no point in punishment for its own sake-loving kindness and acceptance draw the lost back to the path of goodness far more effectively than threats or pain-but they do not confuse patience with allowing evil to work its will unopposed. Force may be a last resort for a priest of the Dawnflower, but when she draws her scimitar, her justice will be swift, implacable, and complete. Those who wage war in Sarenrae’s name attempt to ensure that it is as clean as they can make it, and that it ends as quickly as possible.

Sarenrae’s acceptance of all who strive toward virtue attracts a diverse clergy: clerics, inquisitors, rangers, sundruids, paladins, monks, and bards are common, as are any spellcasters or warriors who wield magic to defeat evil, bring light and hope to the beleaguered, and aid the sick, poor, and downtrodden. Her paladins tend to be adventure-seekers, many of them searching out downtrodden innocents to defend or questing as penance for past failures or perceived flaws. Sarenrae’s status as an angel who ascended to full godhood makes her church an attractive choice for those with celestial heritage, and clergy so blessed are often a source of pride for their congregations. The church’s message of redemption for all also makes it a compelling choice for those struggling to remain virtuous despite fiendish blood. Whatever their origins and skills, those priests who devote their lives to Sarenrae’s service rarely seem to sunburn, even if they have fair complexions, and they tend to tolerate heat easily, even if they hail from cold climates.

Sarenrae’s clergy are devoted to serving their communities, administering to their flocks with a gentle hand and wise words. They provide healing and counsel to those who need it, listen to the confessions of those who wish to bare the wounds of their souls to Sarenrae’s healing light, expose injustice where they find it, arbitrate disputes, and rehabilitate criminals. They promote law and order as long as these benefit everyone, but are not afraid to help organize communities against unjust rulers. Priests view casual cruelty or thoughtlessness as genuinely harmful, and if they accidentally engage in one of these behaviors themselves, they seek out the wronged person and attempt to obtain his forgiveness. They understand that goodness takes practice, and regular daily acts of kindness and virtue aid one in building the moral strength to do what is right when one’s goodness is challenged in more serious ways.

Such kindness vanishes, however, when the church is stirred to action against an evil that cannot be redeemed. At such times, Sarenrae’s priests become dervishes, dancing among foes while their scimitars mete out final justice, and even lay worshipers may take up arms. Swordplay, particularly with the scimitar, is considered an art form among Sarenrae’s priests, and martial-minded priests train rigorously in its intricacies. The church sometimes uses spells like lesser geas and mark of justice to help guide malcontents toward goodness; while they don’t wish to take away free will, they aren’t averse to providing extra encouragement to help others choose the correct path.

The Church of Saranrae occupies a small congregation in the city, it assists with healing and its temple doubles as a hospital whenever it is needed. It has a genuinely good relationship with the Church of Abadar when its focus is on healing but when it tries to intervene in matters of law, calling for rehabilitation of criminals rather than punishment, the two faiths find themselves in heated debates.

The Bank of Abadar reached out to the Church of Sarenrae to assist them with containing the outbreak of the Blood Veil.