Order of the Nail 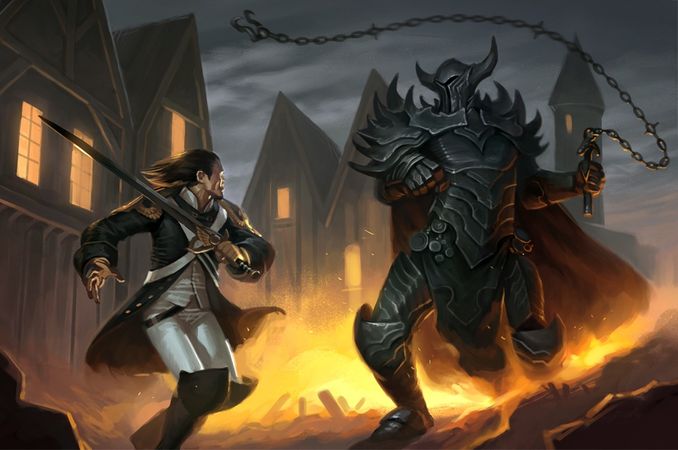 “Savagery must be quelled, in the land, home, and mind.”

The Order of the Nail is a Hellknight Order that operates out of Citadel Vraid in Varisia.

The Order of the Nail specializes in patrolling the fringes of society, guarding it from primitives and throwback to more savage eras. Beyond obvious enemies, such as bloodthirsty orcs and hordes of other brutal humanoids, the knighthood doesn’t discriminate by race, beating back even tribal and unconventional human cultures to make way for their “civilized” brethren. The Nail doesn’t seek out people to purge, instead confronting those who threaten civilized lands or lie directly in the path of expansion.

In 4682 they were coaxed into relocating to the Varisian frontier by Queen Domina, where it has served its interests quite well, doing much to deter the Shoanti of the Storval Plateau against threatening the settlers of the region’s lowlands. Most members of the Order commonly arise from the people of the eastern Varisian lowlands, though some occasionally join from Lastwall and Nirmathas, where questing Hellknights do battle with the orcs and fey of those realms. Feared and misunderstood by both the populace and the city guard, the Hellknights are sometimes referred to as “Domina’s Devils”.

The Order of the Nail was requested to assist in Korvosa by Queen Ileosa Arabasti, their ruthlessness in the face of the agitator’s left a hefty body count. A small contingent of Hellknights remain in the city even after the city has calmed down.

The Order of the Nail was expelled from Korvosa with the Queen citing that the Gray Maidens were sufficient for the city, giving them notice that they would also need to vacate Citadel Vraid.

Order of the Nail