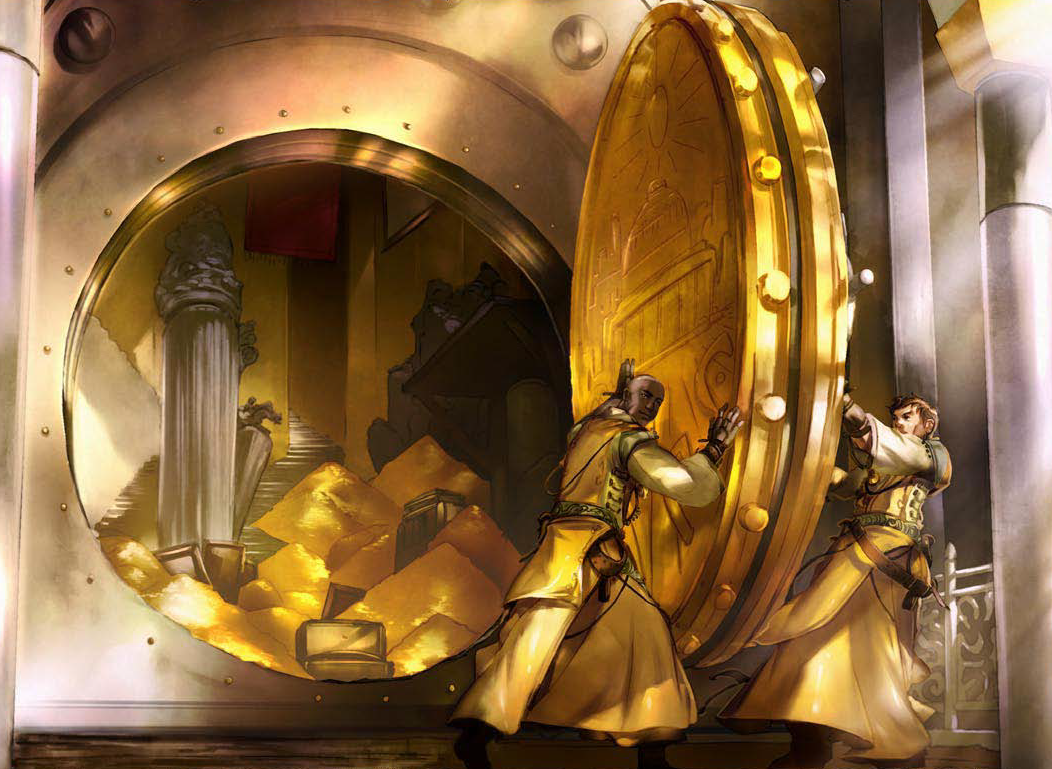 Abadar is the master and guardian of the First Vault, a magical trove in his realm where a perfect version of every creature and creation exists, His mortal artists and craftsman attempt to emulate these perfect forms, inspired by Abadar’s mentoring. Likewise, his arbiters and judges keep his idealized laws in mind when crafting new ones or ruling on existing ones. It is said that centuries ago he allowed mortals to visit the First Vault in dreams. There has been no record of this in a long time, perhaps because he has not found someone worthy, because he fears his enemies might steal the perfect forms, or because he is pacing the advance of civilization to prevent it from growing too quickly and dissolving before it is ready.

The god of cities is stern but rewards those who work hard and whose actions benefit others as well as themselves, though he is morally ambiguous enough to recognize that not every person can benefit from every decision. He respects cautious thought and rejects impulsiveness, seeing it as a base and destructive whim. He teaches that discipline, keen judgment, and following the law eventually leads to wealth, comfort, and happiness. He does not believe in free handouts, and because of this his temples sell potions and healing spells or scrolls rather than giving them to those in need. Any who protest are pointed at the Church of Sarenrae.

His primary worshipers are judges, merchants, lawyers, and aristocrats, all of whom benefit from established laws and commerce. Those who are poor or who have been wronged also worship him, praying he might help reverse their ill fortune, for most mortals seek wealth and the happiness it brings. He expects his followers to abide by local laws (though not foolish, contradictory, toothless, or purposeless laws) and work to promote order and peace. He has no tolerance for gambling or excessive drinking. Abadar’s personal intervention in the mortal world is usually in the form of hints or opportunities rather than direct gifts.

Worshipers who lose Abadar’s favor might find themselves short on money at a crucial time, tongue-tied in the middle of an important deal, or stymied in their craft or art. When he is pleased, deals are more profitable than expected, projects are completed early, and journeys to or within a city take less time than normal. His intervention is subtle, for he expects worshipers to do their own work.

Abadar’s church is well organized and has a city-based hierarchy. The church in each city is independent, encouraging friendly competition between cities to promote trade. Church law forbids the clergy from attacking each other regardless of political, national, or financial motivations. If two rival cities go to war, the churches of Abadar often become neutral territory, not participating in the struggle and acting as safe havens and mediators in the conflict. Warfare creates instability and chips away at the foundations of civilization.

Abadar’s followers believe in advancing civilization, teaching the unenlightened about systems and trade, driving commerce in pursuit of comfort and happiness, and the idea that fairness lies in both the letter and the spirit of the law. They promote cooperation and believe the whole is greater than the sum of its parts,
but also feel that self-interest is the best motivating factor for individuals within a society. While they have an acquisitive bent, they are thrifty rather than miserly, and know that helping their neighbors attain prosperity improves the lot of everyone, themselves included. They turn trails into roads and towns into cities, eliminate monsters and troublemakers in urban and rural areas, adjudicate disputes, make legal rulings, and reassure law-abiding people that the forces of order are watching over them.

Although Abadar’s temples are mercenary when it comes to providing healing, they are generous when protecting public health, seeing it as an important component of their role as guardians of civilization. Likewise, when traveling with others (such as an adventuring party), clerics of Abadar do not charge their companions for healing, seeing it as an equivalent service to a fighter’s sword swing or a ranger’s scouting. Like a business, questing and traveling requires teamwork, and it is part of the cleric’s responsibility to provide healing and magical support-for an equal share of the eventual profits.

The bulk of Abadar’s worshipers work as judges, lawyers, merchants, and all the other roles necessary for keeping society running smoothly; relatively few are adventurers. The pursuit of adventuring as a way to make a living is an indication that local society has failed or broken down most of Abadar’s worshipers who become adventurers believe they have a holy calling to extend the reach of their god to places where civilization has been forgotten. For the most part, if you call Abadar your master, you believe strongly in eliminating agents of chaos, destroying monsters that threaten rural and urban society, teaching the unenlightened about systems and trade, and displaying the truth that law brings. You often mediate between opponents, and believe that fairness lies in both the letter and the spirit of the law.

Adventurers and explorers who worship Abadar rarely embark on solo expeditions, for they see adventuring parties as microcosms of society and believe strongly in the power of cooperation and the idea that the whole is greater than the sum ofits parts. While priests of Abadar usually charge random petitioners for healing, the merchant god’s followers are thrifty rather than miserly, and know that helping their adventuring companions and sharing resources with them will likely increase everyone’s wealth down the road.

The Church of Abadar is the primary faith in Korvosa as well as operates the Bank of Abadar which serves as the city’s primary bank, said to be the safest is all of Varisia. Beneath the temple, in well-guarded lead-lined chambers, the rumored Golden Vaults of Abadar house the Korvosan mint. The mint creates all the coins issued by the city, but also regulates the city’s economy by buying back or releasing gold in an effort to counter inflation or recession.

The Archbanker Darb Tuttle works closely with the ministers of City Hall, the arbiters of Longacre Building, and the Field Marshal of the Korvosan Guard to protect and support the city from a legal angle.

The Church of Abadar abolished their policy of charging coin for the miracles of their gold temporarily when the outbreak of the Blood Veil began. When the cure created by Ramoska Arkminos was discovered by the party it was handed over to the Cressida Kroft and again to the church for it to be reproduced on a mass scale and spread throughout the city.