Yargin was born to a minor noble family of Korvosa and his family was set on sending him to learn to be a wizard, and although being a troubled youth he did end up going to the Acadamae where he often bumped heads with the professors, slacked in class and his general behavior forced his parents to often make charitable contributions to keep him from being expelled. He did do well with alchemy and formed a particular fondness to acid, however when he got into an altercation with another student, he decided to play a joke on him–one that proved fatal to the other student and forced him to flee from the school.

Despite being much poorer than when he had his family’s wealth behind him, he found that life on the streets served him well where he concocted poisons and drugs for various gangs and made a living misusing his alchemical prowess. When he encountered Gaedren they entered a partnership, and though he lacked the intimidation and ruthlessness that Gaedren had, he provided a more professional appearance and talents for accounting and alchemy. The partnership proved fruitful and he has been Gaedren’s right hand man ever since, though he likes to see himself as an equal.

Yargin arrived in the fishery mid-way when Giggles was fighting, he threw some alchemical bombs at Baen before Frank reached him, he injected himself with his Mutagen to make himself more evasive but a couple jabs knocked him out and sent him falling into a vat of chum. He was woken up and tortured for information on Gaedren which he eventually revealed before being turned over to the Korvosan Guard. 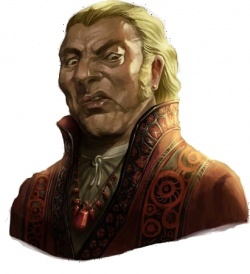