Sergeant in the Korvosan Guard

Verik is a young, opportunistic Watch Sergeant in the Korvosan Guard, though known as a good and loyal soldier he abandoned his post with several of his comrades shortly before King Eodred Arabasti II died and the city plunged into chaos. He took up an old butchery with the four men who left with him with the intention to feed the citizens of Old Korvosa which has suffered greatly in recent times. However his men saw this as a means to extort for money and even perform side jobs as the “Cow Hammer Gang”, killing folks for coin and disposing of their body inside of the meat products sold, all being done without Verik’s knowledge.

When the butchery came under attack Verik was several drinks in and thought that the Guard had finally come for his treason, though after some thought of whether to flee he decided to stand his ground, to him this final stand was against the corrupt monarchy and system that oppresses the poor and weak of the city, unknown to him the real crimes that his compatriots have committed. 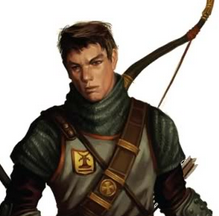