Vendra is a Chelaxian businesswoman who owns a high end perfume boutiques in Korvosa, she imports a lot of the perfumes she uses from Garund and then bumps the prices up significantly, labeling them as exotic in order to fool buyers into thinking that they are worth the price.

Vendra’s business ventures since she arrived in Korvosa have always been unscrupulous at best, though her latest schemes have made her into a snake-oil saleswoman. Her business has already been falling on hard times due to the riot however with the outbreak of the plague she has gotten the idea to selling a fake cure in order to boost up profits before she jumps town with the money. Desperation has caused word of her cure to spread and caught the attention of the Korvosan Guard and the party apprehended her after discovering it was just colored water. 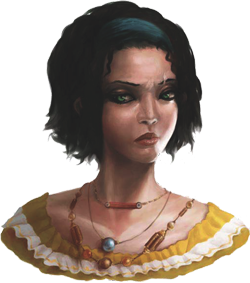