Ramoska has lived as a Nosferatu for hundreds of years and has loathed his existence the majority of that time. In his faintest memories, he half recalls having been a devout worshiper of a god, although he cannot recall which god that was. He regrets the forgotten decisions that led to his undead status and wants nothing more than to end his life—but not as an undead. He believes that if he dies as a vampire he’ll be denied some eternal reward or reunion in the afterlife and thus he seeks a cure for the curse of vampirism—if only so he can die as a man.

Currently, at the will of his vampiric master, Conte Senir Tiriac, Ramoska has been lent to the service of Dr Davaulus, and by extension, the cult of Urgathoa. Through his centuries of alchemical research, the nosferatu has become a scholar of diseases nearly without peer. Arkminos takes umbrage at being drawn away from his experiments in Varno, but is obedient to his patron and master, the Count. Currently his researches in part supplement the disease refinement efforts of the cult of Urgathoa, although he continues his own studies into the nature of vampirism. That some Varisians seem immune to blood veil has fascinated the nosferatu, who now seeks to test the extent of this mysterious resilience.

Ramoska noticed the conflict break out in the temple of Urgathoa and decided it was time for him to return to Ustalav, when the party confronted him he offered them the cure for the Blood Veil in exchange for him to be able to just walk out. 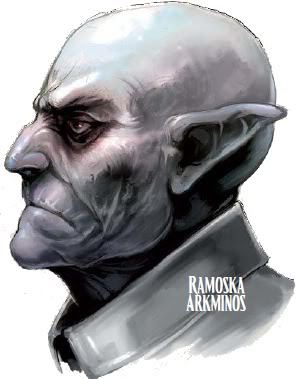