Ileosa Arbasti was born Ileosa Arvanxi to one of Cheliax’s most powerful families in Westcrown. She was unsatisfied with marrying a Chelish noblemen and fled to Korvosa, a move that scandalized her family. She managed to seduce King Eodred Arabasti II and the two were married not long after they met.

The Queen has a distaste for Korvosa and it’s people, referring to it as a backwater city but nonetheless enjoys the title of Queen and the authority and coin that she now possesses.

The party received a reward from the queen for returning her lost brooch and we’re also recruited by her to assist the guard with keeping order in the city. She was present at the execution of “”/characters/trinia-sabor" class=“wiki-content-link”>Trinia Sabor" but when Blackjack showed up she was escorted back inside for her safety.

The queen ordered a royal decree to give authority to the Queen’s Physicians and Gray Maidens when the Blood Veil outbreak began. It was revealed by Lady Andaisin that the Queen was responsible for the spreading of the plague.

At a meeting that she called, Ileosa survived an assassination attempt by Marcus Thalassinus Endrin who shot a bolt into her neck, but rather than fall she instead pulled the bolt out and executed the ranger at lightning speed, alluding that she has somehow gained immense power. 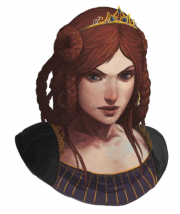