Lady Andaisin was born a sickly little girl and after spending most of her youth at the brink of giving into the disease she was cured by a priest of Urgathoa whose condition to the parents was to take the daughter with him. The cleric deceived the parents by pretending that he would be raising the girl to worship good, but instead he brought her up into the Cult of Urgathoa. She was brainwashed from youth and excelled in the church, and as her initiation she returned to her parents home under the guise of a reunion and instead unleashed them to a dangerous disease that killed them all, an act that not only impressed the other members of her cult but one that Urgathoa took personal note of.

In not long she became the cult leader, her resolve more zealous and ambitious then the rest she proved to be a most worthy leader, and when approached by Dr. Davaulus she saw her opportunity for greatness in unleashing the plague upon the city. Urgathoa had taken note of Lady Andaisin’s actions and is seeking a way to reward her. 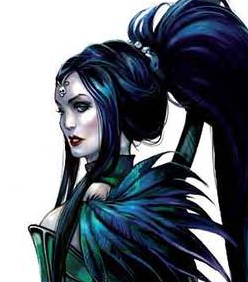