During the reign of Runelord Haphrama, Karzoug was born in a slave den in the city of Malistoke, Shalast. In the early years of his life he endured the horrors of the city’s flesh pits, though known to be a place of torment and terror, what exactly occurred there was erased from history at his request when he ascended to power. When Karzoug walked from the dark gates of that city at the age of 27, his path was soaked in blood and his soul charred as black as night’s void.

Using the gold teeth plucked from the head of his last master, Karzoug was able to buy an apprenticeship with a traveling demon binder named Thurbel, whom he trained under for 7 years serving as both a lure for summoned fiends and a slave to the wizard. He died more than once during these years at the overzealous claws and fangs of demons, but each time his master, who was extremely wealthy from the sale of his services, saw fit to have Karzoug resurrected. During this time his suffering was perhaps as great as it had been in Malistoke, but during these years he rose in magical power, learning the finer points of rulership and exercise of power at the hands of amoral demon tutors.

When Runelord Haphrama called for new apprentices, Karzoug scuffed a summoning circle during one of Thurbel’s conjurations and idly looted his master’s belongings as the freed daemon devoured the wizard’s body. With enough magical talent and many potent magic items and gold to impress even the Runelord, he was selected to be one of Haphrama’s devotees.

Karzoug learned much of the art of transmutation and the magic of greed. He formed an alliance with the denizens of Leng and began to learn of eldritch magic in secret. His pacts promised a twisting of reality, providing his inscrutable tutors greater access to the lands of men. When in the 206th year of his reign, Haphrama finally caught wind of Karzoug’s plotting, he was too late to stop his apprentice. He had prepared a particularly virulent spell with his allies from Leng and consumed both Haphrama and his other apprentice, Vhage, stripping their souls from their bodies and hurling them into the void between planes.

Karzoug took up the burning glaive, the Runelord of Greed’s symbol of rule, at the age of 77 and began his reign. His reign saw the rise of Shalast to new heights, as his cunning and manipulative nature caused him to walk down paths to power that no other Runelord of Greed has ever walked down. Karzoug’s capital at Xin-Shalast rose in prominence, coming one of the age’s most breathtaking cities, though its grandeur existed only to delight the Runelord and the nobles who gathered around him.

In his 466-year reign, Karzoug surpassed all previous Runelords of Greed in power and was among the most powerful of the Thassilonian rulers. He formed an alliance with the Caulborn of Kaer Maga for their prophetic abilities, giving him vague warnings of the upcoming catastrophe though when he came to rely on them in the coming days to the The Earthfall, they abandoned and betrayed him. He managed to put himself into stasis in a demiplane of his own creation, the Eye of Avarice. Karzoug took with him his apprentice Khalib and a dozen other minions, each was planned to wake up after 100 years, but like the other six Runelords his plans vastly underestimate the nature of Thassilon’s fall. His complex multi-layered plans for revival were ruined by the scale of the devastation, as were those of all the Runelords.

Ten Thousand years Karzoug slumbered in the Eye of Avarice, until Mokmurian came and awakened him. Karzoug, whom at the time had no body and was trapped within the Runewell, used his sheer force of will augmented by thousand of years of pent-up magic, made the Stone Giant into his puppet. Over time the sacrifices of those marked with the Sihedron managed to fuel his return, slowly allowing him to rebuild his body within the Eye of Avarice. With the Legions of Shalast being rebuilt while he regains his strength, the stage was set for his dominion of Golarion.

Fortress of the Stone Giants

Karzoug was watching the battle between Mokmurian and the Sandpoint Heroes, when it became apparent that his agent was going to fail him, for the first time he managed to extend his influence beyond the Eye of Avarice to take control of the Stone Giant’s body and execute him.

Sins of the Savior

When Karzoug sensed that Runeforged Weapons were being created by the Sandpoint Heroes that could potentially be used against them, he animated the statue of himself in the Runeforge to try and deal with them himself, but this was magic that was still mostly beyond his current strength and it overexerted him.

When the Sandpoint Heroes arrived in Xin-Shalast he managed to use the Sihedron Medallion worn by them to channel a devastating spell to incapacitate them. Despite this they escaped and he used his magic to challenge them throughout the Pinnacle of Avarice, though they eventually arrived to his lair. There he was vanquished before he could reach maximum power, his body turning to dust. 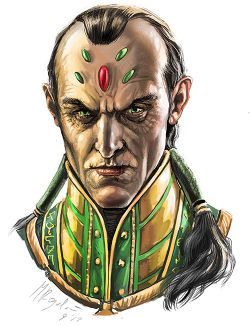