Acolyte in the Church of Abadar

Ishani was born in Vudra, just before the outbreak of Scarlet Leprosy claimed the lives of thousands. During his youth his family lived in relative poverty so it was no surprised that when the disease broke out most of those they knew died to the virus. Ishani and his mother escaped, managing to sneak aboard one of the Arkona’s Expedition return journeys towards Korvosa, though his father died to the disease shortly before they decided to flee. The death of his father and the terror that the disease brought had a lasting effect on Ishani, as he was haunted by nightmares of their horrific deaths. Settled in Korvosa now he decided to dedicate his life to helping the sick, however among Korvosa’s faiths only the church of Abadar comes close to his beliefs.

As an acolyte, Ishani found charging cash for his healings to be difficult for him, watching as the injured and suffering poor who could not afford it fork over their life’s savings or just continue to suffer forced Ishani to use non-magical means to assist them, despite it going against his church’s belief. This has caused Ishani to never go up in the ranks of the church despite his skills and training being well beyond that of an acolyte.

Ishani Dhatri was the cleric who was sent to cure Darien of his tuberculosis.

The party encountered Ishani when going to the Soldado household, attempting herbal remedies to cure the youngest daughter. He requests the party to assist him in swaying the council of Abadar to combat the Blood Veil.

Ishani was present when Queen Ileosa Arabasti first displayed her new powers and fled with Darb Tuttle when the Gray Maidens advanced. 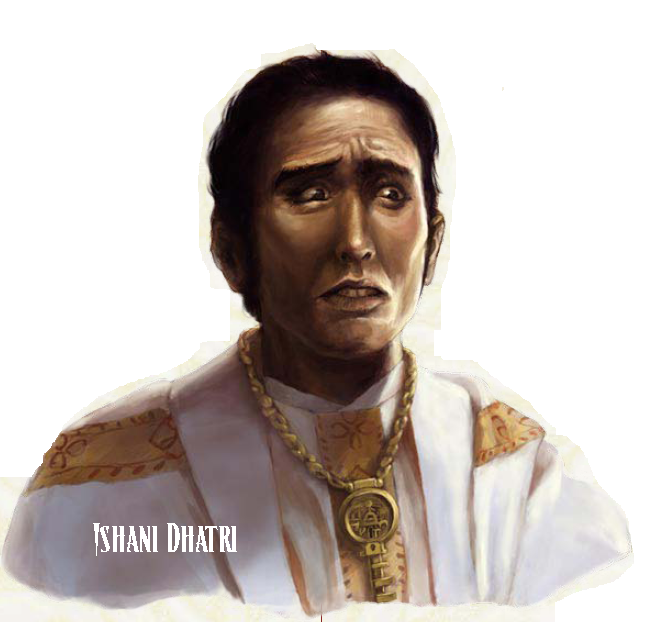