Leader of the Wererat Uprising

Girrigz has been a life-long advocate for action against the humans of Korvosa, as a true Lycanthrope he’s spent his entire 29 years of life as a Wererat feeling trapped beneath the boots of the people above. More than once, he has gone up to the surface to take out his frustration and hatred on beggars and the unsuspecting seeing the predation as revenge. Less than a year ago he took two silver crossbow bolts from a well-equipped Korvosan Guardsmen while he was beating a tramp which led to him nearly dying. His recovery took many months and afterwards he became a more vocal supporter of action against the surface dwellers.

Girrigz saw the Blood Veil as salvation for the Wererats of Korvosa and has made use of the most recent violence against some of his kind to further his agenda of rising to the surface and take control. The party went down into the sewers not long after he began recruiting and put an end to those dreams. 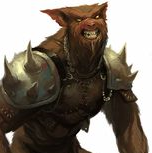