A thick, burly man whose age is readily apparent. While somewhat out of shape and sporting a fairly large gut, his immense size and strength are still apparent in his barrel chest and tree trunk sized arms.

Frank was born into the harsh reality of life in Korvosa’s lower east side. The son of a bitter, abusive alcoholic Orc named Reb Murdock, Frank and his human mother Lenore lived constant fear of violence. It was his mother’s kind heart and fierce resolve that would shape Frank however. From her example, Frank learned kindness and courage, and just how far a little grit and moxy will get you.

On Frank’s tenth birthday, he came home to find the Korvosan guard carting his father away in chains. When Frank ran inside, he found his home had been the setting of a violent struggle, and saw his mother lying still on the living room floor. Finding himself alone and abandoned by a city guard that had no interest in the well being of an orphaned Half-Orc, Frank ended up on the street, having to grow up fast. He learned to steal and con, and took to petty crime as a means of survival, until one day, four years later, Frank stole from the man who would change his life forever.

The man he pick pocketed turned out to be “Mighty” Mick Raggano, famed Korvosan Boxing champion turned trainer. Sensing that Frank was in desperate need of a role model, and seeing the raw potential he had for the sport of boxing, Mick took Frank in and began training him to be a boxing contender. Through training, Frank learned to take all the anger and rage a life of hardship had given him, and use it to fuel his fighting.

Frank spent his prime years rising through the ranks of Korvosa’s professional boxing league. Thanks to a combination of raw brute strength, quick wits and reflexes, and natural finesse and footwork, Frank quickly earned the title of heavy weight champion for himself; the same title that his mentor had carried years before, and came to have the nickname “Furious Frank”. He became a very popular figure in Korvosa, his heart, moxy, somewhat brash demeanor and history of hardship making him an unofficial champion of the people, and hero to Korvosa’s disenfranchised. He spent many years defending his title to the sounds of cheers, while also finding time to settle down with his wife and care for his young daughter.

The good times would not remain for Frank, however. In his success, he developed a taste for drinking and gambling, and it wasn’t long before Frank found himself on the wrong side of some very bad deals. Through a series of bad decisions, Frank ended up in debt to a small time loan shark named Gaedraen Lamm. Lamm ordered Frank to take a dive and give up his belt so that he could make a killing on bets, but Frank’s ego got the better of him, and at the last moment of the match he chose to backpedal on the deal, knocking out his opponent.

That night, Frank once more arrived at home to tragedy. In a sight all too familiar, the house was trashed. He ran inside and found his wife on the floor of their bedroom; her throat cut. His daughter Libby’s room had been wrecked beyond all belief, and while there was blood everywhere, there was no sign of her.

While Frank knew there was only one man who could have been responsible, his pleas for justice fell on deaf ears. The Korvosan guard, corrupt and indifferent, simply told him there was nothing they could do. They told him that his daughter was probably dead as well and then went on their way. Twice now, the state had abandoned him. Spiraling into a drunken haze of anger and depression, Frank knew there was only one person he could blame for the deaths of his family: himself. Had he swallowed his pride and thrown the fight, they would still be alive. Their blood was on his hands.

Frank gave up his title, his fame, and his career in boxing and spent the next 28 years seeping further and further into a life of alcohol and self pity. It became a common sight to see the former people’s champion reduced to a bitter drunk, instigating fights in the seediest bars in the city. Whether he had fought against it or not, Frank had become at least somewhat like the father he grew up hating, and it wasn’t long before the people chose to forget about him, moving on to idolize someone new.

Things remained this way for him, until a mysterious letter appeared in his home one afternoon, and placed him and an group of companions on the path to pull Korvosa back from the brink of disaster. If Frank can defeat his vices and personal demons, the people’s champion might just return, at a time when the people of Korvosa will need him more than ever… 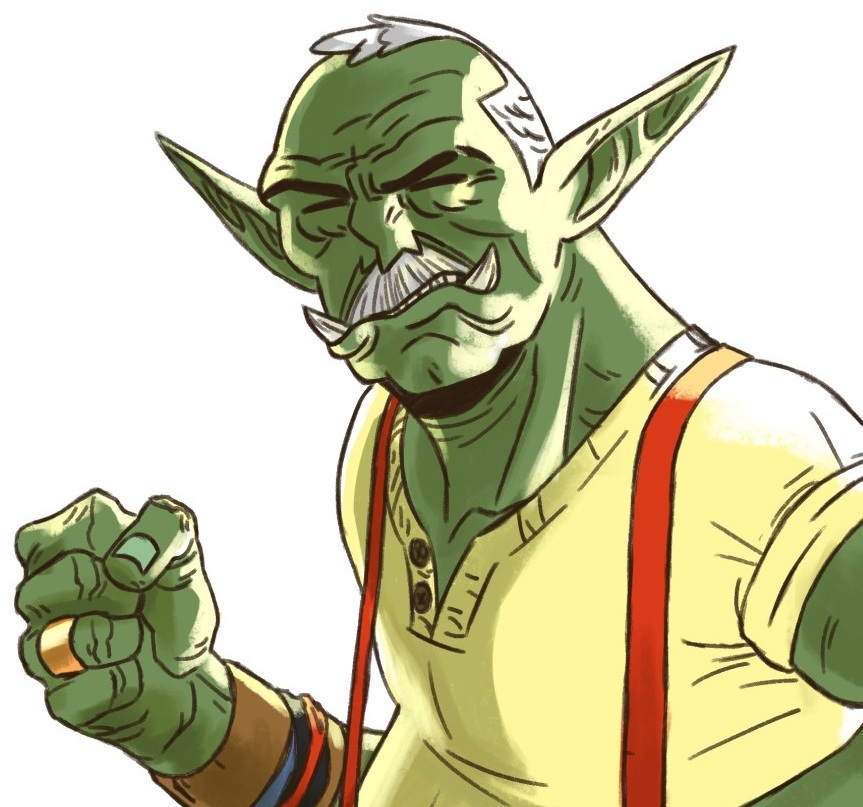