Devargo was a professional boxer, starting on the professional circuit at a very young age after being scouted by a recruiter. After one of his most iconic victories, the same evening his opponent was found dead, Devargo was blamed for the murder and went to jail. Lack of evidence led to an early release but not before many bitter years behind bars awaiting execution for his crime. Prison hardened him as a person and blackened his heart, when he did leave jail he learned that his wife was found dead not long after his incarceration. This drove him down the path of vengeance and he began to hunt down everyone that could have possibly been involved. Over the course of several weeks many of the long-standing members of the Korvosan boxing league we’re found killed, the others quit and fled leading to the entire organization to collapse.

While in prison Devargo was locked with an Alchemist who was an expert in distilling poisons from spiders, a method of death that drained the strength from the victims until they were too weak and their heart stopped. The poison took him a lot of practice to perfect however he managed to and this became his primary method of murder, even training to deliver it with his bare fists. The last person Devargo needed to get to was Stanris Sevenfingers who was only making public appearances at underground boxing matches after the professional league was suspended. He entered this tournament, making it all the way to the final match where he delivered just one punch and waited until the poison drained Stanris of his strength and he died a slow death. This fight earned him the moniker of King of Spiders.

He entered a partnership with a Riddleport smuggler founded Eel’s End, using Devargo’s fame as the King of Spiders to attract clients.This criminal empire flourished, regular shipments of shiver supplied by the Arkona’s have ensured that his vice taxes have always been paid on time. The King of Spiders has not been in the arena in a long time and spends most of his time in his throne room being entertained by lickspittles and sycophants.

Juzaam visited the King of Spiders in hopes to procure an incriminating document that he had in his possession. The hefty sum of gold that he paid easily procured him this document. In exchange for the Pseudodragon he had a game of knivesies played between one of his thugs and Frank, and then one against himself which ended with Frank being floored after a pair of punches.

When the quarantine began, Eel’s End was torched and burned down in the ensuing violence, though Devargo managed to escape and allied himself with the Emperor of Old Korvosa.

Devargo was championed to fight Frank for the Emperor but lost in the one on one battle, he escaped from the castle when full-blown combat broke out. 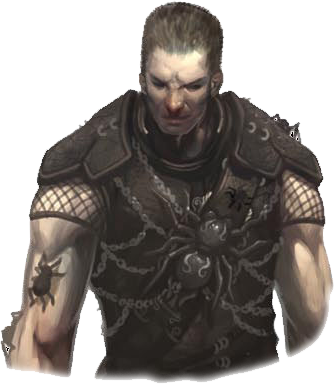