Archbanker Tuttle was a cleric of the Church of Abadar from Garund, who travelled around to represent the god’s interests throughout the Inner Sea region. Eventually he was assigned as Archbanker, assuming a seat with the arbiters and magistrates of Korvosa.

The party encountered the Archbanker among the magistrates of the faith who were arguing how to deal with the economic issues that the plague will create. The Archbanker ordered the council to do what is best for the people of Korvosa rather than what is better for their coin.

Archbanker Tuttle was present at the queen’s ceremony representing the Church of Abadar along with Ishani Dhatri and fled when the slaughter began. 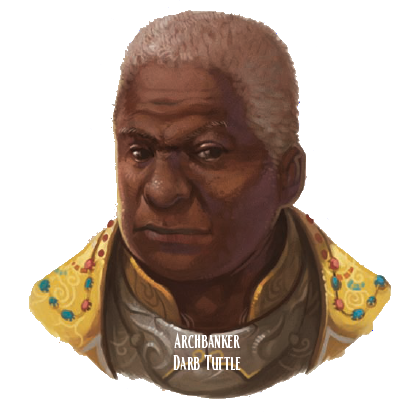